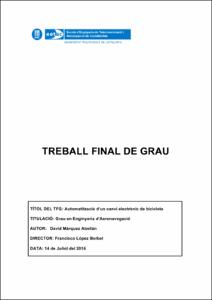 This report explains the process carried out to use an automatic gear change applied to a bicycle. To do this, a preliminary investigation of the nowadays used systems in this discipline has been done. It is explained the evolution that the bicycle has lived to compare the old gearshift systems with the nowadays systems, which are completely electronic. The objective was to modify one of these electronic changes to make it work automatically. But the price and the complexity of these devices led to rule out this option. So it was decided to modify a classic change gear (by cable) to get an automatic change. To achieve the bicycle change gears automatically, it has been necessary to use sensors, a microcontroller and a motor capable of regulating the tension of the cable of the gear change, that is to say that the motor change gears. Three sensors have been used to take measurements of speed, pedalling strength and pedalling rate. These sensors have been employed to make different test to analyse the results. Taking into account these results, it was deduced that must be given many pedalling in rises. Meanwhile, in a flat terrain, is important the number of pedalling but also the rate to maintain the inertia. The study has not been done downgrades because only an eighth speed set was used. The microcontroller has been programmed taking into account these results. It chose the gear in order to obtain the maximum efficiency. Arduino Mega 2560 has been used, because a great storage and a great number of ports have been required. Two servomotors get the information from the microcontroller in order to regulate the position of the gear changes. These engines have been programed to turn a specific degree. Depend on the gear that you want to use, engines will turn the grades that the microcontroller have programed. The theoretical case has also been solved successfully. The prototype has demonstrated that sensors accumulate a lot of errors. However, servo engines support the worst and bad effect, because they are not prepared to hold weight. As a result, its operation is not effective. Finally, the prototype has been installed on a bicycle that makes measurements and process data in an accurate way in spite of the gear changes have to be done manually, due to the servo engines are not prepared for this function.
SubjectsBicycles--Equipment and supplies, Bicicletes -- Innovacions tecnològiques
URIhttp://hdl.handle.net/2117/89305