Telecommunications system of a CubeSat satellite 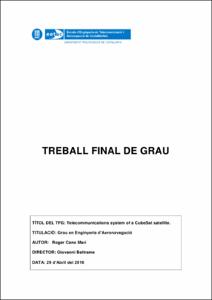 This Final degree's thesis is done under the UPC-Canadà program in which the author realizes his last degree year in Montréal, Canada, to the Polytechnique de Montréal university under the supervision of Dr. Giovanni Beltrame being part of his laboratory Mistlab and also on the Polyorbite group of students. Polyorbite is an organization that participates in the biannual contest CSDC (Canadian Satellite Design Challenge) that consists on the realization from 0 of a 3U CubeSat by undergraduate and master students. By the start of this thesis on September 2016, the contest was in the middle of the 2014-2016 iteration without having almost nothing on the telecommunication part, having just 2 semesters for design, build and test an entirely telecommunications system, suitable for the satellite purpose, until June 2016 in which the final presentations of the contest took place on Ottawa. The purpose of this thesis is then an early design of a telecommunications system for a CubeSat satellite.
SubjectsTelecommunications--Equipment and supplies, Estacions terrestres (Telecomunicacions per satèl·lits)
URIhttp://hdl.handle.net/2117/89259