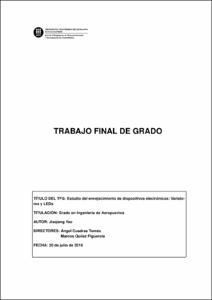 In this project presented a study of the degradation through accelerated tests of LEDs and varistors. This degradation is measured based on Sr, the irreversible entropy that is generated during testing. For the modelization of the degradation, the first and second laws of thermodynamics were needed. On the one hand, it explained the first law of thermodynamics that deals with the property energy and conservation of it. Whereas on the other hand, the second law defines a new property called entropy. Using this property as a basis, the increase of entropy principle was introduced. According to the explained definition of entropy, the main objective of this project was defined. The entropy generation property has been used to characterize the shape of degradation of electrical components. This project focused on the characterization of the varistors and LEDs. To perform these objectives a data adquisition circuit based on the Arduino Uno board has been designed and a LabVIEW program has been designed as well. For the experiments with LEDs, also included a detailed analysis of the most relevant properties such as light intensity, wavelength and FWHM (the full width half maximum). Once the proper experimental results of the laboratory was obtained, it has been processed with a MATLAB program designed by the designer himself. After the data processing, the discussions of these experimental results was developed. Finally it drew the conclusions based on the results and discussions that appointed favorably the entropy as a good indicator for degradation of LEDs and varistors. And also, possible future works as the continuation of this project have been cited at the end of the project. In addition, an aproximated budget that is required for the project has been attached at the annex D.
SubjectsVaristors, Díodes electroluminescents
URIhttp://hdl.handle.net/2117/89198