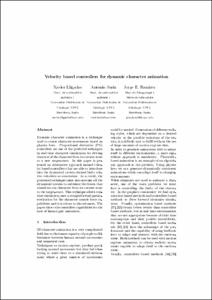 Except where otherwise noted, content on this work is licensed under a Creative Commons license : Attribution-NonCommercial-NoDerivs 3.0 Spain
Abstract
Dynamic character animation is a technique used to create character movements based on physics laws. Proportional derivative (PD) controllers are one of the preferred techniques in real time character simulations for driving the state of the character from its current state to a new target-state. In this paper is presented an alternative approach named velocity based controllers that are able to introduce into the dynamical system desired limbs relative velocities as constraints. As a result, the presented technique takes into account all the dynamical system to calculate the forces that transform our character from its current state to the target-state. This technique allows realtime simulation, uses a straightforward parameterization for the character muscle force capabilities and it is robust to disturbances. The paper shows the controllers capabilities for the case of human gait animation.
CitationLligadas, X.; Susín, A.; Ramirez, J. Velocity based controllers for dynamic character animation. A: Congreso Español de Informática Gráfica. "XX Congreso Español de Informática Gráfica". Valencia: 2010, p. 77-86.
URIhttp://hdl.handle.net/2117/8902
ISBN978-84-92812-50-9
Collections
Share: