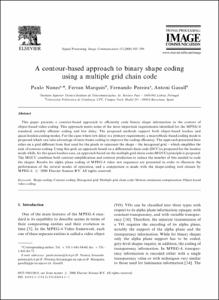 Document typeArticle
Rights accessOpen Access
Abstract
This paper presents a contour-based approach to efficiently code binary shape information in the context of object-based video coding. This approach meets some of the most important requirements identified for the MPEG-4 standard, notably efficient coding and low delay. The proposed methods support both object-based lossless and quasi-lossless coding modes. For the cases where low delay is a primary requirement, a macroblock-based coding mode is proposed which can take advantage of inter-frame coding to improve the coding efficiency. The approach presented here relies on a grid different from that used for the pixels to represent the shape – the hexagonal grid – which simplifies the task of contour coding. Using this grid, an appraoch based on a differential chain code (DCC) is proposed for the lossless mode while, for the quasi-lossless case, an approach based on the multiple grid chain code (MGCC) principle is proposed. The MGCC combines both contour simplification and contour prediction to reduce the number of bits needed to code the shapes. Results for alpha plane coding of MPEG-4 video test sequences are presented in order to illustrate the performance of the several modes of operation, and a comparison is made with the shape-coding tool chosen by MPEG-4.
CitationNunes, P., Marques, F., Pereira, F., Gasull, A. A contour-based approach to binary shape coding using a multiple grid chain code. "Signal processing: image communication", Maig 2000, vol. 15, núm. 7-8, p. 585-599.
URIhttp://hdl.handle.net/2117/89016
DOI10.1016/S0923-5965(99)00041-7
ISSN0923-5965
Collections
Share: