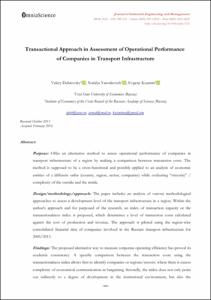 Except where otherwise noted, content on this work is licensed under a Creative Commons license : Attribution-NonCommercial 3.0 Spain
Abstract
Purpose: Offer an alternative method to assess operational performance of companies in transport infrastructure of a region by making a comparison between transaction costs. The method is supposed to be a cross-functional and possibly applied to an analysis of economic entities of a different order (country, region, sector, companies) while evaluating “viscosity” / complexity of the outside and the inside. Design/methodology/approach: The paper includes an analysis of various methodological approaches to assess a development level of the transport infrastructure in a region. Within the author's approach and for purposed of the research, an index of transaction capacity or the transactionalness index is proposed, which determines a level of transaction costs calculated against the cost of production and revenue. The approach is piloted using the region-wise consolidated financial data of companies involved in the Russian transport infrastructure for 2005/2013. Findings: The proposed alternative way to measure corporate operating efficiency has proved its academic consistency. A specific comparison between the transaction costs using the transactionalness index allows first to identify companies or regions/sectors, where there is excess complexity of economical communication in bargaining. Secondly, the index does not only point out indirectly to a degree of development in the institutional environment, but also the infrastructure (the transport one in the example given). Third, the transactionalness level may say of uncertainty and risks. As an addition to theoretical and methodological aspects of transaction costs, the authors justify an approach to their size estimation, as well as their differentiation dividing them into two groups: those of a natural type and a background type. In a course of their discussion, the authors have concluded that there are such transaction costs in place, which are standard in a manner of speaking. Originality/value: There is a discussion whether it is scientifically reasonable to use an index of transactionalness. There are reasons for applicability of the alternative approach to assess operational performance of companies in transport infrastructure as an indicative criterion of favouring external conditions to execute exchange transactions. According to the authors, a high level of transactionalness is associated with a low development level of transport infrastructure in a region. This says that their competitiveness is specifically less.
CitationDubrovsky, Valery; Yaroshevich, Natalya; Kuzmin, Evgeny. Transactional approach in assessment of operational performance of companies in transport infrastructure. "Journal of Industrial Engineering and Management", Juny 2016, vol. 9, núm. 2, p. 389-412.
URIhttp://hdl.handle.net/2117/88988
DOI10.3926/jiem.1721
DLB-28744-2008
ISSN2013-0953
Collections
Share: