Experimental setup and procedure for the measurement of the 7Be(n,alpha)alpha reaction at n_TOF 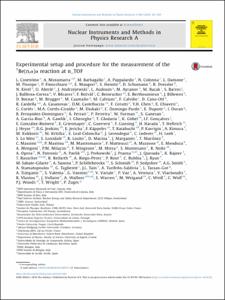 Experimental setup and procedure for the measurement of the 7Be(n,alpha)alpha reaction at n_TOF (2,430Mb)
Share:

Document typeArticle
Rights accessOpen Access
European Commission's projectCHANDA - solving CHAllenges in Nuclear DAta (EC-FP7-605203)
Abstract
The newly built second experimental area EAR2 of the n_TOF spallation neutron source at CERN allows to perform (n, charged particles) experiments on short-lived highly radioactive targets. This paper describes a detection apparatus and the experimental procedure for the determination of the cross-section of the 7Be(n,a)a reaction, which represents one of the focal points toward the solution of the cosmological Lithium abundance problem, and whose only measurement, at thermal energy, dates back to 1963. The apparently unsurmountable experimental dif¿culties stemming from the huge 7Be ¿-activity, along with the lack of a suitable neutron beam facility, had so far prevented further measurements. The detection system is subject to considerable radiation damage, but is capable of disentangling the rare reaction signals from the very high background. This newly developed setup could likely be useful also to study other challenging reactions requiring the detectors to be installed directly in the neutron beam.
CitationCosentino, L., Musumarra, A., Barbagallo, M., Calviño, F., Casanovas, A., Cortes, G., Riego, A., Tarifeño, A. Experimental setup and procedure for the measurement of the 7Be(n,alpha)alpha reaction at n_TOF. "Nuclear instruments and methods in physics research. Section A, accelerators SP", 11 Setembre 2016, vol. 830, p. 197-205.
URIhttp://hdl.handle.net/2117/88936
DOI10.1016/j.nima.2016.05.089
ISSN0168-9002
Publisher versionhttp://www.sciencedirect.com/science/article/pii/S016890021630482X
Collections
Share: