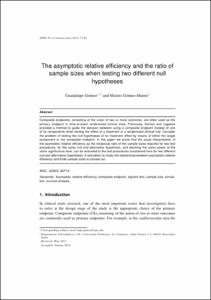 Composite endpoints, consisting of the union of two or more outcomes, are often used as the primary endpoint in time-to-event randomized clinical trials. Previously, Gómez and Lagakos provided a method to guide the decision between using a composite endpoint instead of one of its components when testing the effect of a treatment in a randomized clinical trial. Consider the problem of testing the null hypotheses of no treatment effect by means of either the single component or the composite endpoint. In this paper we prove that the usual interpretation of the asymptotic relative efficiency as the reciprocal ratio of the sample sizes required for two test procedures, for the same null and alternative hypothesis, and attaining the same power at the same significance level, can be extended to the test procedures considered here for two different null and alternative hypotheses. A simulation to study the relationship between asymptotic relative efficiency and finite sample sizes is carried out.
CitationGómez, Guadalupe; Gómez-Mateu, Moisés. The asymptotic relative efficiency and the ratio of sample sizes when testing two different null hypotheses. "SORT", 12 Juny 2014, vol. 38, núm. 1, p. 73-88.
URIhttp://hdl.handle.net/2117/88935
ISSN1696-2281