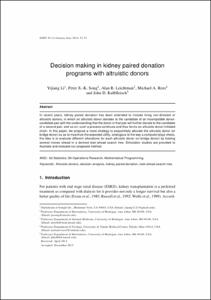 In recent years, kidney paired donation has been extended to include living non-directed or altruistic donors, in which an altruistic donor donates to the candidate of an incompatible donor candidate pair with the understanding that the donor in that pair will further donate to the candidate of a second pair, and so on; such a process continues and thus forms an altruistic donor-initiated chain. In this paper, we propose a novel strategy to sequentially allocate the altruistic donor (or bridge donor) so as to maximize the expected utility; analogous to the way a computer plays chess, the idea is to evaluate different allocations for each altruistic donor (or bridge donor) by looking several moves ahead in a derived look-ahead search tree. Simulation studies are provided to illustrate and evaluate our proposed method.
CitationLi, Yijiang [et al.]. Decision making in kidney paired donation programs with altruistic donors. "SORT", 12 Juny 2014, vol. 38, núm. 1, p. 53-72.
URIhttp://hdl.handle.net/2117/88926
ISSN1696-2281