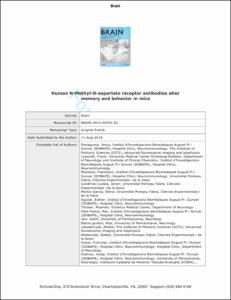 Anti-N-methyl D-aspartate receptor (NMDAR) encephalitis is a severe neuropsychiatric disorder that associates with prominent memory and behavioural deficits. Patients’ antibodies react with the N-terminal domain of the GluN1 (previously known as NR1) subunit of NMDAR causing in cultured neurons a selective and reversible internalization of cell-surface receptors. These effects and the frequent response to immunotherapy have suggested an antibody-mediated pathogenesis, but to date there is no animal model showing that patients’ antibodies cause memory and behavioural deficits. To develop such a model, C57BL6/J mice underwent placement of ventricular catheters connected to osmotic pumps that delivered a continuous infusion of patients’ or control cerebrospinal fluid (flow rate 0.25 µl/h, 14 days). During and after the infusion period standardized tests were applied, including tasks to assess memory (novel object recognition in open field and V-maze paradigms), anhedonic behaviours (sucrose preference test), depressive-like behaviours (tail suspension, forced swimming tests), anxiety (black and white, elevated plus maze tests), aggressiveness (resident-intruder test), and locomotor activity (horizontal and vertical). Animals sacrificed at Days 5, 13, 18, 26 and 46 were examined for brain-bound antibodies and the antibody effects on total and synaptic NMDAR clusters and protein concentration using confocal microscopy and immunoblot analysis. These experiments showed that animals infused with patients’ cerebrospinal fluid, but not control cerebrospinal fluid, developed progressive memory deficits, and anhedonic and depressive-like behaviours, without affecting other behavioural or locomotor tasks. Memory deficits gradually worsened until Day 18 (4 days after the infusion stopped) and all symptoms resolved over the next week. Accompanying brain tissue studies showed progressive increase of brain-bound human antibodies, predominantly in the hippocampus (maximal on Days 13–18), that after acid extraction and characterization with GluN1-expressing human embryonic kidney cells were confirmed to be against the NMDAR. Confocal microscopy and immunoblot analysis of the hippocampus showed progressive decrease of the density of total and synaptic NMDAR clusters and total NMDAR protein concentration (maximal on Day 18), without affecting the post-synaptic density protein 95 (PSD95) and α-amino-3-hydroxy-5-methyl-4-isoxazolepropionic acid (AMPA) receptors. These effects occurred in parallel with memory and other behavioural deficits and gradually improved after Day 18, with reversibility of symptoms accompanied by a decrease of brain-bound antibodies and restoration of NMDAR levels. Overall, these findings establish a link between memory and behavioural deficits and antibody-mediated reduction of NMDAR, provide the biological basis by which removal of antibodies and antibody-producing cells improve neurological function, and offer a model for testing experimental therapies in this and similar disorders.
URIhttp://hdl.handle.net/2117/88911
Publisher versionhttp://doi.org/10.1093/brain/awu310