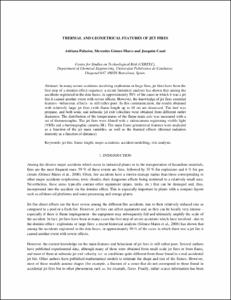 Document typeConference report
PublisherPhilippe Tanguy/Canadian Society for Chemical Engineering
Rights accessOpen Access
Abstract
Abstract: In many severe accidents involving explosions or large fires, jet fires have been the first step of a domino effect sequence: a recent historical analysis has shown that among the accidents registered in the data bases, in approximately 50% of the cases in which it was a jet fire it caused another event with severe effects. However, the knowledge of jet fires essential features –behaviour, effects– is still rather poor. In this communication, the results obtained with relatively large jet fires (with flame length up to 10 m) are discussed. The fuel was propane, and both sonic and subsonic jet exit velocities were obtained from different outlet diameters. The distribution of the temperatures of the flame main axis was measured with a set of thermocouples. The jet fires were filmed with a videocamera registering visible light (VHS) and a thermographic camera (IR). The main flame geometrical features were analyzed as a function of the jet main variables, as well as the thermal effects (thermal radiation intensity as a function of distance).
CitationPalacios, A.; Gómez-Mares, M.; Casal, J. Thermal and geometrical features of jet fires. A: World Congress of Chemical Engineering. "8th World Congress of Chemical Engineering". Montreal, Quebec: Philippe Tanguy/Canadian Society for Chemical Engineering, 2009.
URIhttp://hdl.handle.net/2117/8891
ISBN0-920804-44-6
Collections
Share: