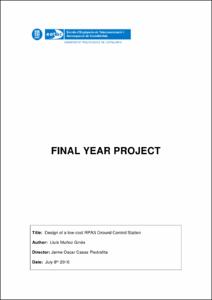 In this project, a Ground Control Station (GCS) for a Remotely Piloted Aircraft System (RPAS) has been designed, developed and built from scratch. The GCS is part of a larger System called Unmanned Aircraft System (UAS) formed by the RPAS in the air segment, the communications link and the Ground Control Station. First of all, a brief study has been done in order to know the different types of GCS that currently exist. There are lots of GCS types, depending on the scope of the RPAS that has to be controlled, the project budget or the mission requirements. Given these characteristics, the scope of the GCS will be defined. Once stablished the scope of the GCS, its different components will be determined. From the microprocessor to the Liquid Cristal Display (LCD) controller, the components will be listed and described, as well as its characteristics and advantages against other options. Also, the process followed to design some of the parts such as the power system will be explained. Apart from the hardware the Ground Control Station also needs software to operate. The different software and operating systems installed and used will be described onwards, as well as installation methods. Once the different parts are defined, Solid Works® 3D design program will be used for stablishing the physical design of the GCS. Considering the available space given by the scope of the project and the amount of elements to be fitted and connected, a realistic design will be made. This design will be used later on to build the actual GCS. The building process will be briefly shown and the GCS will be tested. Finally, a conclusion will be made in order to stablish the viability of the project, taking into account the already existing platforms currently used as well as the power consumption and battery endurance, weight, price and technical performances.
SubjectsGround control station, Avions no tripulats
URIhttp://hdl.handle.net/2117/88887