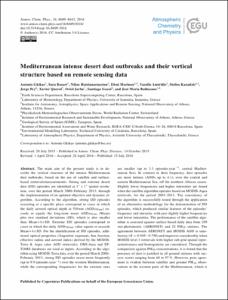 The main aim of the present study is to describe the vertical structure of the intense Mediterranean dust outbreaks, based on the use of satellite and surface-based retrievals/measurements. Strong and extreme desert dust (DD) episodes are identified at 1°  ×  1° spatial resolution, over the period March 2000–February 2013, through the implementation of an updated objective and dynamic algorithm. According to the algorithm, strong DD episodes occurring at a specific place correspond to cases in which the daily aerosol optical depth at 550 nm (AOD550 nm) exceeds or equals the long-term mean AOD550 nm (Mean) plus two standard deviations (SD), which is also smaller than Mean+4 × SD. Extreme DD episodes correspond to cases in which the daily AOD550 nm value equals or exceeds Mean+4 × SD. For the identification of DD episodes, additional optical properties (Ångström exponent, fine fraction, effective radius and aerosol index) derived by the MODIS-Terra & Aqua (also AOD retrievals), OMI-Aura and EP-TOMS databases are used as inputs. According to the algorithm using MODIS-Terra data, over the period March 2000–February 2013, strong DD episodes occur more frequently (up to 9.9 episodes year−1) over the western Mediterranean, while the corresponding frequencies for the extreme ones are smaller (up to 3.3 episodes year−1, central Mediterranean Sea). In contrast to their frequency, dust episodes are more intense (AODs up to 4.1), over the central and eastern Mediterranean Sea, off the northern African coasts. Slightly lower frequencies and higher intensities are found when the satellite algorithm operates based on MODIS-Aqua retrievals, for the period 2003–2012. The consistency of the algorithm is successfully tested through the application of an alternative methodology for the determination of DD episodes, which produced similar features of the episodes' frequency and intensity, with just slightly higher frequencies and lower intensities. The performance of the satellite algorithm is assessed against surface-based daily data from 109 sun-photometric (AERONET) and 22 PM10 stations. The agreement between AERONET and MODIS AOD is satisfactory (R = 0.505 − 0.750) and improves considerably when MODIS level 3 retrievals with higher sub-grid spatial representativeness and homogeneity are considered. Through the comparison against PM10 concentrations, it is found that the presence of dust is justified in all ground stations with success scores ranging from 68 to 97 %. However, poor agreement is evident between satellite and ground PM10 observations in the western parts of the Mediterranean, which is attributed to the desert dust outbreaks' vertical extension and the high altitude of dust presence. The CALIOP vertical profiles of pure and polluted dust observations and the associated total backscatter coefficient at 532 nm (β532 nm), indicate that dust particles are mainly detected between 0.5 and 6 km, though they can reach 8 km between the parallels 32 and 38° N in warm seasons. An increased number of CALIOP dust records at higher altitudes is observed with increased latitude, northwards to 40° N, revealing an ascending mode of the dust transport. However, the overall intensity of DD episodes is maximum (up to 0.006 km−1 sr−1) below 2 km and at the southern parts of the study region (30–34° N). Additionally, the average thickness of dust layers gradually decreases from 4 to 2 km, moving from south to north. In spring, dust layers of moderate-to-high β532 nm values ( ∼  0.004 km−1 sr−1) are detected over the Mediterranean (35–42° N), extending from 2 to 4 km. Over the western Mediterranean, dust layers are observed between 2 and 6 km, while their base height is decreased down to 0.5 km for increasing longitudes underlying the role of topography and thermal convection. The vertical profiles of CALIOP β532 nm confirm the multilayered structure of the Mediterranean desert dust outbreaks on both annual and seasonal bases, with several dust layers of variable geometrical characteristics and intensities. A detailed analysis of the vertical structure of specific DD episodes using CALIOP profiles reveals that the consideration of the dust vertical structure is necessary when attempting comparisons between columnar MODIS AOD retrievals and ground PM10 concentrations.
CitationGkikas, Antonis [et al.]. Mediterranean intense desert dust outbreaks and their vertical structure based on remote sensing data. "Atmospheric Chemistry and Physics", 15 Juliol 2016, vol. 16, p. 8609-8642.
URIhttp://hdl.handle.net/2117/88849
DOI10.5194/acp-16-8609-2016
ISSN1680-7316
Publisher versionhttp://www.atmos-chem-phys.net/16/8609/2016/acp-16-8609-2016.html