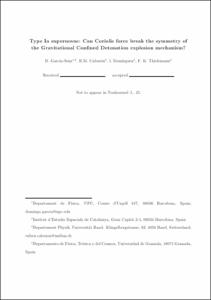 Cabezón, Rubén Martin
Domínguez, Inmaculada
Thielemann, Friedrich-K
Document typeArticle
PublisherInstitute of Physics (IOP)
Rights accessOpen Access
Abstract
© 2016. The American Astronomical Society. All rights reserved.. Currently the number of models aimed at explaining the phenomena of type Ia supernovae is high and distinguishing between them is a must. In this work we explore the influence of rotation on the evolution of the nuclear flame that drives the explosion in the so-called gravitational confined detonation models. Assuming that the flame starts in a pointlike region slightly above the center of the white dwarf (WD) and adding a moderate amount of angular velocity to the star we follow the evolution of the deflagration using a smoothed particle hydrodynamics code. We find that the results are very dependent on the angle between the rotational axis and the line connecting the initial bubble of burned material with the center of the WD at the moment of ignition. The impact of rotation is larger for angles close to 90° because the Coriolis force on a floating element of fluid is maximum and its principal effect is to break the symmetry of the deflagration. Such symmetry breaking weakens the convergence of the nuclear flame at the antipodes of the initial ignition volume, changing the environmental conditions around the convergence region with respect to non-rotating models. These changes seem to disfavor the emergence of a detonation in the compressed volume at the antipodes and may compromise the viability of the so-called gravitational confined detonation mechanism.
CitationGarcia, D., Cabezón, R.M., Domínguez, I., Thielemann, F.K. Type Ia supernovae: Can Coriolis force break the symmetry of the gravitational confined detonation explosion mechanism?. "Astrophysical Journal Letters", 10 Març 2016, vol. 819, núm. 2.
URIhttp://hdl.handle.net/2117/88795
DOI10.3847/0004-637X/819/2/132
ISSN1538-4357
Collections
Share: