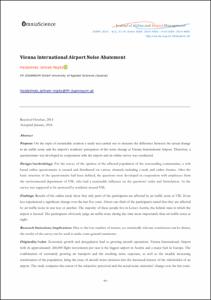 Purpose: On the topic of sustainable aviation a study was carried out to measure the difference between the actual change in air traffic noise and the airport’s residents’ perception of the noise change at Vienna International Airport. Therefore, a questionnaire was developed in cooperation with the airport and an online survey was conducted. Design/methodology: For the survey of the opinion of the affected population of the surrounding communities, a web based online questionnaire is created and distributed via various channels including e-mail, and online forums. After the basic structure of the questionnaire had been defined, the questions were developed in cooperation with employees form the environmental department of VIE, who had a sustainable influence on the questions’ order and formulation. As the survey was supposed to be answered by residents around VIE. Findings : Results of the online study show that only parts of the participants are affected by air traffic noise at VIE. Even less experienced a significant change over the last five years. About one third of the participants stated that they are affected by air traffic noise in one way or another. The majority of these people live in Lower Austria, the federal state in which the airport is located. The participants obviously judge air traffic noise during day time more importantly than air traffic noise at night. Research limitations/implications : Due to the low number of returns, no statistically relevant conclusions can be drawn, the results of the survey can be used to make some general statements. Originality/value: Economic growth and deregulation lead to growing aircraft operations. Vienna International Airport with its approximately 260,000 flight movements per year is the biggest airport in Austria and a major hub in Europe. The combination of constantly growing air transport and the resulting noise exposure, as well as the steadily increasing sensitization of the population, bring the issue of aircraft noise emission into the increased interest of the stakeholder of an airport. The study compares the extent of the subjective perceived and the actual noise emissions’ change over the last years.
CitationJelinek-Nigitz, Heidelinde. Vienna International Airport noise abatement. "Journal of Airline and Airport Management", Juny 2016, vol. 6, núm. 1, p. 61-91.
URIhttp://hdl.handle.net/2117/88761
DOI10.3926/jairm.34
ISSN2014-4806