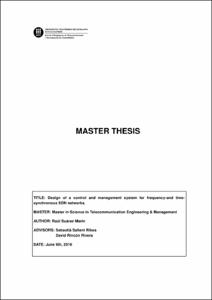 Document typeMaster thesis
Rights accessOpen Access
Abstract
Many of today's telecommunications systems rely on strict timing and synchronization requirements. This is the case of cellular telephony (3G, 4G/LTE), where base stations need accurate and stable frequency clocks in order to obtain their carrier radio frequencies, arbitrate the frequency- and time-shared access of terminals, and coordinate the handover of terminals between adjacent cells. The imminent deployment of 5G networks, with a much higher density of cells and speed, will further increase the need for synchronization. On the one hand, Synchronous Ethernet (SyncE) is a well-known, cheap, scalable Ethernet data plane, with the addition of special messages that convey frequency synchronization information. On the other hand, Precision Time Protocol (PTP) is a widely used protocol to transport time information, and used to synchronize nodes in networks. On top of that, SDN is a new networking paradigm that provides an abstraction of the forwarding function, decoupling the data plane from the control plane. The control of the network is moved to the controller, an external centralized entity that manages the network configuration based on policies through a southbound interface, for example OpenFlow. SDN architecture opens the way to the virtualization of network functions, the global optimization of network operations, and reduces operational costs. Two solutions proposed moving SyncE and PTP to SDN networks: SyncE has been introduced in SDN with the SDN-enabled SyncE networks and PTP with the ReversePTP. SDN-enabled SyncE proposed extensions to OpenFlow 1.0 which enables the SDN network to control the circulation of ESMC PDU, the possibility of transmitting SyncE statistics and to build synchronization trees based on SyncE. ReversePTP proposed extensions to OpenFlow which enabled the SDN network to request the time to each node, so the SDN controllers know clock offsets between slave clocks (network elements) and itself (master clock). These extensions allow to coordinate the handover of terminals between adjacent cells in mobile networks and a kind of PTP. However, there is no solution in the literature which proposes an SDN+PTP+SyncE (i.e. a full synchronous) solution. This master thesis proposes multiple standard extensions of the OpenFlow protocol in order to deploy Fully-Synchronous SDN (FSS) networks. For that, SyncE and PTP are studied and implemented in the SDN architecture. The proposed extensions and modifications have been deployed and successfully tested in a real environment. Results showed a good performance on PTP time-stamping.
SubjectsComputer network architectures, Xarxes definides per programari (Tecnologia de xarxes d'ordinadors), Ordinadors, Xarxes d' -- Arquitectures
URIhttp://hdl.handle.net/2117/88748
Collections
Share: