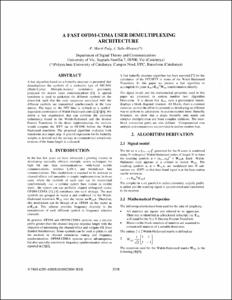 Document typeConference report
PublisherInstitute of Electrical and Electronics Engineers (IEEE)
Rights accessOpen Access
All rights reserved. This work is protected by the corresponding intellectual and industrial property rights. Without prejudice to any existing legal exemptions, reproduction, distribution, public communication or transformation of this work are prohibited without permission of the copyright holder
Abstract
A fast algorithm based on a butterfly structure is presented that demultiplexes the symbols of a particular type of MC-MA (multi-carrier multiple-access) modulation previously proposed for indoor radio communications. A special transform is used to packetize the different symbols on the down-link such that the code sequences associated with the different symbols are transmitted synchronously at the base station. The input to the FFT bins is defined as a symbol-dependent combination of Walsh-Hadamard codes. We derive a fast architecture that can combine the common redundancy found in the Walsh-Hadamard and the inverse Fourier transform. In the direct implementation, the receiver would compute the IFFT (as in OFDM) before the Walsh-Hadamard transform. The proposed algorithm evaluates both transforms in a single step. A general expression for the butterfly weights is derived and the savings in computational complexity in terms of the frame length is evaluated.
CitationMarti, P., Sala, J. A fast OFDM-CDMA user demultiplexing architecture. A: IEEE International Conference on Acoustics, Speech, and Signal Processing. "ICASSP 2000: 2000 IEEE international conference on acoustics, speech, and signal processing: silver anniversary, proceedings: 5-9 June 2000: Hilton Hotel and Convention Center, Istanbul, Turkey". Istanbul: Institute of Electrical and Electronics Engineers (IEEE), 2000, p. 3358-3361.
URIhttp://hdl.handle.net/2117/88665
DOI10.1109/ICASSP.2000.860120
ISBN0-7803-6293-4
Publisher versionhttp://ieeexplore.ieee.org.recursos.biblioteca.upc.edu/stamp/stamp.jsp?tp=&arnumber=860120&tag=1
Collections
Share: