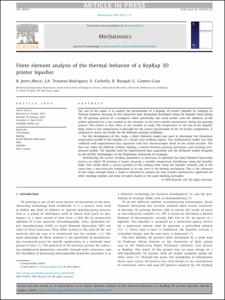 Document typeArticle
Rights accessOpen Access
Abstract
The aim of this paper is to analyze the performance of a RepRap 3D printer liquefier by studying its thermal behavior, focusing on the convective heat dissipation developed along the liquefier body during the 3D printing process of a workpiece. More specifically, this work tackles with the influence of the airflow generated by a fan coupled to the extruder, on the heat transfer mechanisms during the printing process. The airflow is thus taken as the variable of study. The temperature at the top of the liquefier body, where a low temperature is desirable for the correct preservation of the 3D printer components, is analyzed to assess the results for the different printing conditions. For the development of this study, a finite elements model was used to determine the theoretical temperature profile of the liquefier in a steady state working regime. This mathematical model was then validated with experimental data registered with four thermocouples fixed on the tested extruder. The data was taken for different airflows, finding a relation between printing parameters and resulting tem- perature profile. The liquefier used for experimental data acquisition was the BCNozzle model, designed by the BCN3D Technologies of the Polytechnic University of Catalonia. Determining the correct working parameters is necessary to optimize the fused filament fabrication process on which 3D printing is based, ensuring a suitable temperature distribution along the liquefier body. This would allow a correct position of the melting front along the liquefier channel, and at the same time, a non-excessive temperature at its top, next to the feeding mechanism. This is the relevance of this study, through which a model is obtained to analyze the heat transfer mechanisms, applicable for other working regimes and other extruders based on the same working principles.
CitationJerez, R., Travieso-Rodríguez, J.A., Corbella, X., Busqué, R., Gomez, G. Finite element analysis of the thermal behavior of a RepRap 3D printer liquefier. "Mechatronics", 01 Maig 2016, vol. 36, p. 119-126.
URIhttp://hdl.handle.net/2117/88606
DOI10.1016/j.mechatronics.2016.04.007
ISSN0957-4158
Publisher versionhttp://www.sciencedirect.com/science/article/pii/S0957415816300289
Collections
Share: