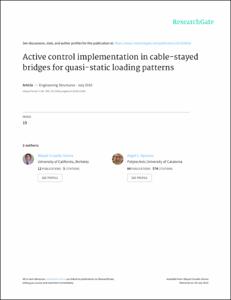 Except where otherwise noted, content on this work is licensed under a Creative Commons license : Attribution-NonCommercial-NoDerivs 3.0 Spain
Abstract
The following paper deals with active control implementation in cable-stayed bridges. Recent developments in structural active control of cable-stayed bridges are focused on the adaptability to dynamic effects produced by earthquakes or extreme winds (El Ouni et al., 2012; Pakos and Wojcicki, 2014; Domaneschi et al., 2015a,b). Nevertheless, no attention has been paid to the static or quasi-static case. As stated by Housner et al. (1996), Song et al. (2006) or Gilewski and Al Sabouni-Zawadzka (2015), active control could also be useful to diminish fatigue in the day-to-day performance of this type of bridges by decreasing stresses adaptively. Indeed, the following paper shows that excitation periods produced by traffic loads and natural periods of vibration of this type of bridges are sufficiently distant one another so as to conclude that a quasi-static analysis can be performed. Filling this gap, the following paper proposes a structural analysis procedure to include active control systems in the design process of cable stayed bridges, as well as suggestions which ought to be considered in order to include these cases into codes. The results of the paper, studying both non-cumulative and cumulative load cases, show a reduction in unbalanced bending moment referred to the Neutral Moment State of around 25%, depending on the load case. As a result, active control systems compensating quasi-static loading patterns can certainly help engineers optimise the design of these emblematic structures.
CitationCrusells, M., Aparicio, A. Active control implementation in cable-stayed bridges for quasi-static loading patterns. "Engineering structures", Juliol 2016, vol. 118, p. 394-406.
URIhttp://hdl.handle.net/2117/88579
DOI10.1016/j.engstruct.2016.03.061
ISSN0141-0296
Publisher versionhttp://www.sciencedirect.com/science/article/pii/S014102961630102X
Collections
Share: