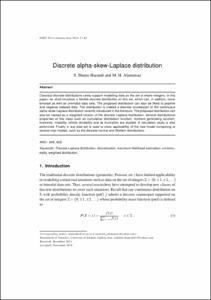 Classical discrete distributions rarely support modelling data on the set of whole integers. In this paper, we shall introduce a flexible discrete distribution on this set, which can, in addition, cover bimodal as well as unimodal data sets. The proposed distribution can also be fitted to positive and negative skewed data. The distribution is indeed a discrete counterpart of the continuous alpha-skew-Laplace distribution recently introduced in the literature. The proposed distribution can also be viewed as a weighted version of the discrete Laplace distribution. Several distributional properties of this class such as cumulative distribution function, moment generating function, moments, modality, infinite divisibility and its truncation are studied. A simulation study is also performed. Finally, a real data set is used to show applicability of the new model comparing to several rival models, such as the discrete normal and Skellam distributions.
CitationHarandi, S. Shams; Alamatsaz, M. H. Discrete alpha-skew-Laplace Distribution. "SORT", Juny 2015, vol. 39, núm. 1, p. 71-84.
URIhttp://hdl.handle.net/2117/88520
ISSN1696-2281