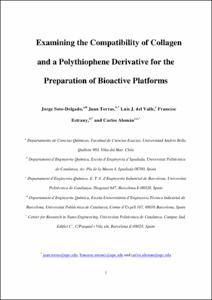 Document typeArticle
Rights accessOpen Access
Abstract
Fundamental characteristics of bioactive platforms based on biocomposites of poly(3,4-ethylenedioxythiophene) (PEDOT) and collagen, named P(EDOT:CLG), have been examined using an experimental–computational approach. The protein affects both the morphology and electrochemical activity of PEDOT. Specifically, P(EDOT:CLG) shows spherical-like nodules that have been attributed to the collagen rod aggregates organized in phases separated from that of PEDOT. This phase separation results in a reduction of the ability to exchange charge reversibly, even though collagen stabilizes the PEDOT matrix from electrochemical degradation. On the other hand, viability assays indicate that the bioactivity of P(EDOT:CLG) is significantly higher than that of PEDOT in terms of cellular adhesion and proliferation. Thus, the biocomposite promotes the formation of 3D biostructures formed by the superposition of cellular monolayers, mimicking the growth of biological tissues. In order to gain microscopic information about the formation of specific interactions between PEDOT and collagen molecules in the biocomposite, quantum mechanical calculations on complexes formed by their building blocks have been performed in different environments (i.e. vacuum, chloroform and aqueous solution). Results evidence the important role played by non-conventional C–HO hydrogen bonds, which is consistent with previous findings on complexes involving DNA and dopamine. The environment affects considerably the binding energy, which decreases with increasing polarity of the environment. However, in all environments the repeating units of PEDOT form stronger interactions with L-hydroxyproline than with L-proline. On the other hand, intermolecular interaction patterns predicted using implicit and explicit solvation models present a remarkable agreement and have been identified by visualizing the reduced electron density gradient.
CitationSoto-Delgado, J., Torras, J., del Valle, LJ., Estrany, F., Aleman, C. Examining the compatibility of collagen and a polythiophene derivative for the preparation of bioactive platforms. "RSC advances", 09 Gener 2015, vol. 5, núm. 12, p. 9189-9203.
URIhttp://hdl.handle.net/2117/88471
DOI10.1039/C4RA13812K
ISSN2046-2069
Publisher versionhttp://pubs.rsc.org/en/content/articlelanding/2015/ra/c4ra13812k#!divAbstract
Collections
Share: