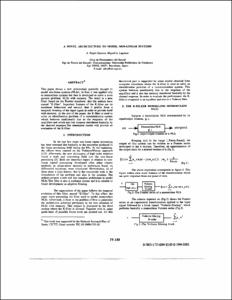 Document typeConference report
Rights accessOpen Access
Abstract
This paper shows a new architecture specially thought to model non-linear systems (NLSs). At first, it was applied only to memoryless systems but then it developed to solve a more general problem, NLSs with memory. The result is a new filter, based on the Fourier transform, that the authors have named “K-filter”. Important features of the K-filter are its nonlinear behaviour and second, that it profits from a temporal diversity of the input signal in order to provide itself with memory. At the end of the paper, the K-filter is used to solve an identification problem of a communication system which behaves nonlinearly due to the response of the amplifiers and which also has memory introduced basically by the channel response. The simulation results will provide an evaluation of the K-filter.
CitationPages, A., Lagunas, M. A novel architecture to model non-linear systems. A: IEEE International Conference on Acoustics, Speech, and Signal Processing. "ICASSP-94: 1994 IEEE International Conference on Acoustics, Speech, and Signal Processing: April 19- 22, 1994: Adelaide Convention Centre, Adelaide, South Australia". Adelaide, South Australia: 1994, p. IV/133-IV/136.
URIhttp://hdl.handle.net/2117/88459
DOI10.1109/ICASSP.1994.389853
Publisher versionhttp://ieeexplore.ieee.org/stamp/stamp.jsp?tp=&arnumber=389853
Collections
Share: