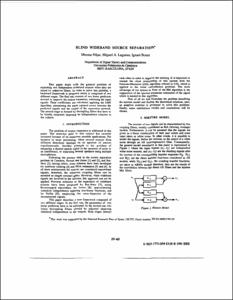 Except where otherwise noted, content on this work is licensed under a Creative Commons license : Attribution-NonCommercial-NoDerivs 3.0 Spain
Abstract
This paper deals with the general problem of separating two independent wideband sources when they are mixed by unknown filters. In order to solve this problem, a backward framework is proposed which is composed of two different stages. The first one consists of two linear predictors devoted to improve the source separation, whitening the input signals. Their coefficients are calculated applying the LMS algorithm, minimizing the mean squared errors between the predicted signals and the output of the separation network. The second stage is formed by decoupling filters that have to be blindly estimated imposing an independence criterion to the outputs
CitationNajar, M., Lagunas, M., Bonet, I. Blind wideband source separation. A: IEEE International Conference on Acoustics, Speech, and Signal Processing. "ICASSP-94: 1994 IEEE International Conference on Acoustics, Speech, and Signal Processing: April 19- 22, 1994: Adelaide Convention Centre, Adelaide, South Australia". Adelaide, South Australia: 1994, p. IV/65-IV/68.
URIhttp://hdl.handle.net/2117/88458
DOI10.1109/ICASSP.1994.389875
Publisher versionhttp://ieeexplore.ieee.org/stamp/stamp.jsp?tp=&arnumber=389875
Collections
Share: