A general adaptive algorithm for nonGaussian source separation without any constraint 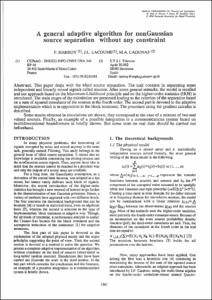 A general adaptive algorithm for nonGaussian source separation without any constraint.pdf (204,4Kb)
Share:

Except where otherwise noted, content on this work is licensed under a Creative Commons license : Attribution-NonCommercial-NoDerivs 3.0 Spain
Abstract
This paper deals with the blind source separation. The task consists in separating some independent and linearly mixed signals called sources. After some general remarks, the model is recalled and our approach based on the Maximum-Likelihood principle and on the higher-order statistics (HOS) is introduced. The main stages of the calculation are presented leading to the criterion of the separation based on a sum of squared cumulants of the sources at the fourth order. The second part is devoted to the adaptive implementation which is in opposition to the block treatment. The procedure using the gradient calculus is described. Some results obtained in simulations are shown, they correspond to the case of a mixture of two real valued sources. Finally, an example of a possible integration in a communications system based on multidimensional beamformers is briefly shown. But some tests on real data should be carried out beforehand.
CitationLagunas, M. A general adaptive algorithm for nonGaussian source separation without any constraint. A: European Signal Processing Conference. "EUSIPCO 1994: Signal processing VII: theories and applications; proceedings of EUSIPCO-94, Seventh European Signal Processing Conference; Edinburgh, Scotland, U.K., 13-16 September 1994". Edinburgh, Scotland: 1994, p. 1161-1164.
URIhttp://hdl.handle.net/2117/88451
Collections
Share: