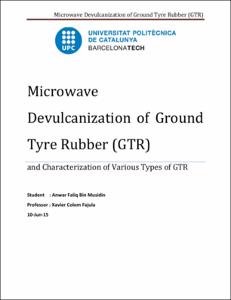 Document typeBachelor thesis
Rights accessOpen Access
Abstract
Three types of ground tyre rubber (GTR) are treated with microwave in order to study the effect of microwave devulcanization. The first one is the standard GTR of truck (A1) and car (A2), mechanically reactivated GTR of truck (B1) and car (B2) and GTR which has been mechanically and chemically devulcanized (C1). Various analysis techniques have been used in order to characterize the devulcanizates produced under 0 minutes, 3 minutes, and 5 minutes of exposure to microwave. From the FTIR spectra, the most prominent result can be seen from the devulcanizates of mechanical reactivated GTR (B1). Various types of bonds such as methyl group, methylene group, carbon double bonds, and carbon-sulfur bonds have been reduced due to the decrease in peaks at certain bands. The Thermogravimetric Analysis (TGA) of the mechanically reactivated GTR for car (B2) and chemical and mechanical devulcanized GTR (C1) shows a direct relationship of decrease of inorganic residual as the exposure time to microwave increase. The crosslink density test of standard GTR of car (A2), B1 and B2 showed an increase in crosslink density as time of exposure increase. The sol fraction test was done by using acetone and all samples showed an increase in sol content as time of exposure increases
SubjectsTires--Recycling, Tires, Rubber, Vulcanization, Vulcanized fiber, Pneumàtics -- Reciclatge, Pneumàtics, Cautxú, Vulcanització, Microones
DegreeGRAU EN ENGINYERIA QUÍMICA (Pla 2009)
URIhttp://hdl.handle.net/2117/88407
Collections
Share: