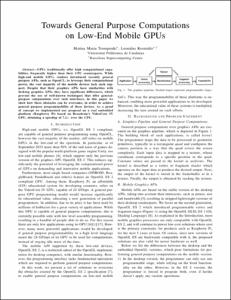 Show full item record
Trompouki, Matina M.
Kosmidis, Leonidas
Document typeConference report
PublisherInstitute of Electrical and Electronics Engineers (IEEE)
Rights accessOpen Access
European Commission's projectHIPEAC - High Performance and Embedded Architecture and Compilation (EC-FP7-287759)
Abstract
GPUs traditionally offer high computational capabilities, frequently higher than their CPU counterparts. While high-end mobile GPUs vendors introduced recently general purpose APIs, such as OpenCL, to leverage their computational power, the vast majority of the mobile devices lack such support. Despite that their graphics APIs have similarities with desktop graphics APIs, they have significant differences, which prevent the use of well-known techniques that offer general-purpose computations over such interfaces. In this paper we show how these obstacles can be overcome, in order to achieve general purpose programmability of these devices. As a proof of concept we implemented our proposal on a real embedded platform (Raspberry Pi) based on Broadcom's VideoCore IV GPU, obtaining a speedup of 7.2× over the CPU.
CitationTrompouki, Matina M.; Kosmidis, Leonidas. "Towards general purpose computations on low-end mobile GPUs". Institute of Electrical and Electronics Engineers (IEEE), 2016.
URIhttp://hdl.handle.net/2117/88346
Publisher versionhttp://ieeexplore.ieee.org/xpl/login.jsp?tp=&arnumber=7459369&url=http%3A%2F%2Fieeexplore.ieee.org%2Fxpls%2Fabs_all.jsp%3Farnumber%3D7459369
Collections
Share: