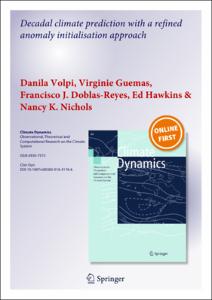 In decadal prediction, the objective is to exploit both the sources of predictability from the external radiative forcings and from the internal variability to provide the best possible climate information for the next decade. Predicting the climate system internal variability relies on initialising the climate model from observational estimates. We present a refined method of anomaly initialisation (AI) applied to the ocean and sea ice components of the global climate forecast model EC-Earth, with the following key innovations: (1) the use of a weight applied to the observed anomalies, in order to avoid the risk of introducing anomalies recorded in the observed climate, whose amplitude does not fit in the range of the internal variability generated by the model; (2) the AI of the ocean density, instead of calculating it from the anomaly initialised state of temperature and salinity. An experiment initialised with this refined AI method has been compared with a full field and standard AI experiment. Results show that the use of such refinements enhances the surface temperature skill over part of the North and South Atlantic, part of the South Pacific and the Mediterranean Sea for the first forecast year. However, part of such improvement is lost in the following forecast years. For the tropical Pacific surface temperature, the full field initialised experiment performs the best. The prediction of the Arctic sea-ice volume is improved by the refined AI method for the first three forecast years and the skill of the Atlantic multidecadal oscillation is significantly increased compared to a non-initialised forecast, along the whole forecast time.
CitationVolpi, Danila [et al.]. Decadal climate prediction with a refined anomaly initialisation approach. "Climate Dynamics", 04 Juny 2016.
URIhttp://hdl.handle.net/2117/88316
DOI10.1007/s00382-016-3176-6
ISSN0930-7575
Publisher versionhttp://link.springer.com/article/10.1007%2Fs00382-016-3176-6