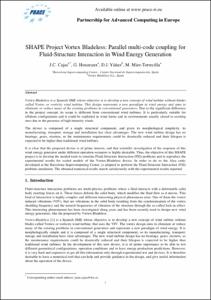 Yáñez, David J.
Mier-Torrecilla, Mónica
Document typeResearch report
Rights accessOpen Access
All rights reserved. This work is protected by the corresponding intellectual and industrial property rights. Without prejudice to any existing legal exemptions, reproduction, distribution, public communication or transformation of this work are prohibited without permission of the copyright holder
ProjectPRACE-4IP - PRACE 4th Implementation Phase Project (EC-H2020-653838)
Abstract
Vortex-Bladeless is a Spanish SME whose objective is to develop a new concept of wind turbine without blades called Vortex or vorticity wind turbine. This design represents a new paradigm in wind energy and aims to eliminate or reduce many of the existing problems in conventional generators. Due to the significant difference in the project concept, its scope is different from conventional wind turbines. It is particularly suitable for offshore configuration and it could be exploited in wind farms and in environments usually closed to existing ones due to the presence of high intensity winds. The device is composed of a single structural component, and given its morphological simplicity, its manufacturing, transport, storage and installation has clear advantages. The new wind turbine design has no bearings, gears, etcetera, so the maintenance requirements could be drastically reduced and their lifespan is expected to be higher than traditional wind turbines. It is clear that the proposed device is of prime interest, and that scientific investigation of the response of this wind energy generator under different operation scenarios is highly desirable. Thus, the objective of this SHAPE project is to develop the needed tools to simulate Fluid-Structure Interaction (FSI) problems and to reproduce the experimental results for scaled models of the Vortex-Bladeless device. In order to do so the Alya code, developed at the Barcelona Supercomputing Center, is adapted to perform the Fluid-Structure Interaction (FSI) problem simulation. The obtained numerical results match satisfactorily with the experimental results reported.
CitationCajas, Juan C. [et al.]. "SHAPE Project Vortex Bladeless: Parallel multi-code coupling for Fluid-Structure Interaction in Wind Energy Generation". 2016.
URIhttp://hdl.handle.net/2117/88263
URL other repositoryhttp://www.prace-ri.eu/IMG/pdf/WP216.pdf
Collections
Share: