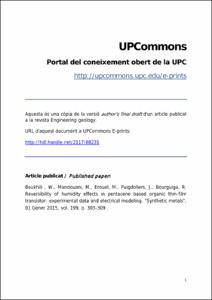 Bourguiga, R.
Document typeArticle
Rights accessOpen Access
Abstract
P-type organic thin-film transistors (OTFTs), in which the active semiconductor is made of pentacene with silicon dioxide as a gate insulator, were fabricated and characterized. The effects of humidity on the electrical characteristics of pentacene based thin-film transistors (pentacene-TFTs) in the linear and saturation regimes were investigated. We report the variation of the electrical parameters by relative humidity (RH) extracted from the experimental electrical characteristics current–voltage of pentacene-TFT devices. We show that the diffusion of water molecules (H2O), the creation of acceptor states due to the presence of oxygen and the formation of clusters in the pentacene active layer considerably affect the stability and the performances of pentacene-TFTs. The degradation of electrical parameters of the pentacene-TFTs under relative humidity (RH) can be recovered with a simple pumping under vacuum (3 × 10-5 to 5 × 10-5 mbar). We also show that the changes introduced by the effects of humidity are reversible. Moreover the pentacene-TFT presents an intensive response for a high relative humidity (RH = 57%), which could be used for a humidity detection device technology.
CitationBoukhili , W., Mandouani, M., Erouel, M., Puigdollers, J., Bourguiga, R. Reversibility of humidity effects in pentacene based organic thin-film transistor: experimental data and electrical modeling. "Synthetic metals", 01 Gener 2015, vol. 199, p. 303-309.
URIhttp://hdl.handle.net/2117/88231
DOI10.1016/j.synthmet.2014.12.009
ISSN0379-6779
Publisher versionhttp://www.sciencedirect.com/science/article/pii/S0379677914004433
Collections
Share: