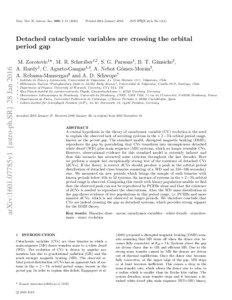 Schowpe, A. D.
Document typeArticle
Rights accessOpen Access
European Commission's projectWDTRACER - White Dwarfs as Tracers of Stellar, Binary and Planetary Evolution (EC-FP7-320964)
Abstract
A central hypothesis in the theory of cataclysmic variable (CV) evolution is the need to explain the observed lack of accreting systems in the similar or equal to 2-3 h orbital period range, known as the period gap. The standard model, disrupted magnetic braking (DMB), reproduces the gap by postulating that CVs transform into inconspicuous detached white dwarf (WD) plus main sequence systems, which no longer resemble CVs. However, observational evidence for this standard model is currently indirect and thus this scenario has attracted some criticism throughout the last decades. Here, we perform a simple but exceptionally strong test of the existence of detached CVs (dCVs). If the theory is correct, dCVs should produce a peak in the orbital period distribution of detached close binaries consisting of a WD and an M4-M6 secondary star. We measured six new periods which brings the sample of such binaries with known periods below 10 h to 52 systems. An increase of systems in the similar or equal to 2-3 h orbital period range is observed. Comparing this result with binary population models, we find that the observed peak cannot be reproduced by post-common envelope binaries (PCEBs) alone and that the existence of dCVs is needed to reproduce the observations. Also, the WD mass distribution in the gap shows evidence of two populations in this period range, i.e. PCEBs and more massive dCVs, which is not observed at longer periods. We therefore conclude that CVs are indeed crossing the gap as detached systems, which provides strong support for the DMB theory.
Description
This article has been accepted for publication in Monthly Notices of the Royal Astronomical Society Published by Oxford University Press on behalf of the Royal Astronomical Society.
CitationZorotovic, M., Schreiber, M. R., Parsons, S., Gaensicke, B., Hardy, A., Agurto, C., Nebot, A., Rebassa, A., Schowpe, A. Detached cataclysmic variables are crossing the orbital period gap. "Monthly notices of the Royal Astronomical Society", 21 Abril 2016, vol. 457, núm. 4, p. 3867-3877.
URIhttp://hdl.handle.net/2117/88173
DOI10.1093/mnras/stw246
ISSN0035-8711
Publisher versionhttp://mnras.oxfordjournals.org/content/457/4/3867
Collections
Share: