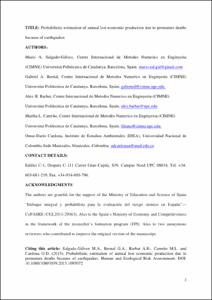 Cardona Arboleda, Omar Dario
Document typeArticle
Rights accessOpen Access
All rights reserved. This work is protected by the corresponding intellectual and industrial property rights. Without prejudice to any existing legal exemptions, reproduction, distribution, public communication or transformation of this work are prohibited without permission of the copyright holder
Abstract
A methodology to estimate, in a probabilistic way, the annual cost to society of premature deaths because of earthquakes is proposed in this article. The methodology makes use of results obtained by means of prospective and probabilistic seismic risk assessments where expected deaths caused by the collapse of buildings are obtained. Those results, combined with demographic and macroeconomic indicators such as the age distribution, life expectancy at birth, and per capita gross domestic product, are used to estimate the cost to society in terms of lost productivity due to premature mortality because of earthquakes. The proposed methodology does not attempt to estimate nor assign a cost to human lives at any stage, but the one associated to lost productivity at the societal level. One of the descriptors of the methodology is part of the components of the disability adjusted life year, a widely used metric in the public health field that estimates the burden of diseases based mostly on historical data. As an example, the methodology is applied to Medellin, the second largest city of Colombia, finding that the cost of lost productivity due to premature mortality because of earthquakes has a similar order of magnitude to the direct physical losses in the public and private building stock calculated in a previous probabilistic seismic risk assessment.
Description
This is an Accepted Manuscript of an article published by Taylor & Francis Group in Human and Ecological Risk Assessment: An International Journal on 2016, available online at: http://www.tandfonline.com/10.1080/10807039.2015.1095072
CitationSalgado-Gálvez, M.A., Bernal, G., Barbat, A. H., Carreño, M.L., Cardona, O.D. Probabilistic estimation of annual lost economic production due to premature deaths because of earthquakes. "Human and ecological risk assessment", Febrer 2016, vol. 22, núm. 2, p. 543-557.
URIhttp://hdl.handle.net/2117/88171
DOI10.1080/10807039.2015.1095072
ISSN1080-7039
Publisher versionhttp://www.tandfonline.com/doi/abs/10.1080/10807039.2015.1095072?journalCode=bher20
Collections
Share: