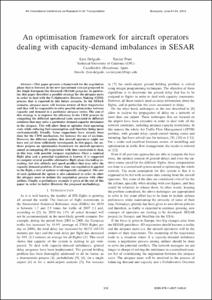 Except where otherwise noted, content on this work is licensed under a Creative Commons license : Attribution-NonCommercial-NoDerivs 3.0 Spain
Abstract
This paper presents a framework for the negotiation phase that is foreseen in the new operational concept proposed in the Single European Sky Research (SESAR) program. In particular, this paper describes a possible strategy for the airspace users in order to deal with the Collaborative Decision Making (CDM) process that is expected in this future scenario. In the SESAR scenario, airspace users will become owners of their trajectories and they will be responsible to solve possible mismatches between capacity and demand in a particular airspace sector. The aim of this strategy is to improve the efficiency in the CDM process by computing the different operational costs associated to different solutions that may solve a particular demand-capacity imbalance in the airspace. This will allow them to optimise their operating costs while reducing fuel consumption and therefore being more environmentally friendly. Some suggestions have already been done for the CDM mechanism, for instance the use of auctions. However, the different options that aircraft operators might use have not yet been sufficiently investigated. In this paper, the authors propose an optimisation framework for aircraft operators aimed at computing 4D trajectories with time constraints to deal, in this way, with possible airspace regulations. Once a nominal flight plan and a potential regulation is known, it is suggested to compute several possible alternative flight plans (including rerouting, but also altitude and speed profiles) that may solve the capacity-demand problem. If more than one regulation is applied to the flight, a tree of options is subsequently computed. The cost of each optimised the option is also calculated in order to allow the airspace users to initiate the negotiation process with other airlines. Finally, a preliminary example is given at the end of this paper in order to better illustrate the proposed methodology.
CitationDelgado, L.; Prats, X. An optimisation framework for aircraft operators dealing with capacity-demand imbalances in SESAR. A: International Conference on Research in Air Transportation. "4th International Conference on Research in Air Transportation". Budapest: 2010, p. 339-346.
URIhttp://hdl.handle.net/2117/8812
ISBN978-1-4507-1468-6
Publisher versionhttp://www.icrat.org/downloads/proceedings.pdf
Collections
Share: