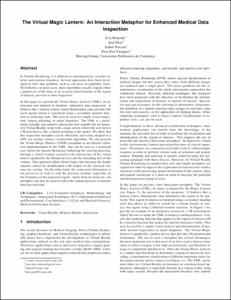 Document typeExternal research report
Rights accessOpen Access
Abstract
In Volume Rendering, it is difficult to simultaneously visualize interior and exterior structures. Several approaches have been developed to solve this problem, such as cut-away or exploded views. Nevertheless, in most cases, those algorithms usually require either a preprocess of the data, or an accurate determination of the region of interest, previous to data inspection. In this paper we present the Virtual Magic Lantern (VML), an interaction tool tailored to facilitate volumetric data inspection. It behaves like a lantern whose virtual illumination cone provides the focal region which is visualized using a secondary transfer function or rendering style. This may be used for simple visual inspection, surgery planning, or injure diagnosis. The VML is a particularly friendly and intuitive interaction tool suitable for an immersive Virtual Reality setup with a large screen, where the user moves a Wanda device, like a lantern pointing to the model. We show that this inspection metaphor can be efficiently and easily adapted to a GPU ray casting volume visualization algorithm. We also present the Virtual Magic Window (VMW) metaphor as an efficient collateral implementation of the VML, that can be seen as a restricted case where the lantern illuminates following the viewing direction, through a virtual window created as the intersection of the virtual lantern (guided by the Wanda device) and the bounding box of the volume. This approach allows better frame rates because the shader requires almost no modification with respect to the classical volume ray casting. On the other hand, the contextual information is not perceived as well as with the previous method, especially on the boundary of the inspected region. Apart from its main use, our metaphor can also be used to aid in the tedious process of transfer function selection.
CitationMonclús, E., Díaz, J., Navazo, I., Vázquez, P. "The Virtual magic lantern: an interaction metaphor for enhanced medical data inspection". 2010.
Is part ofLSI-10-10-R
URIhttp://hdl.handle.net/2117/88074
Collections
Share: