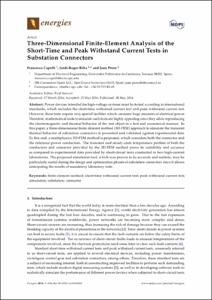 Pérez, Joan
Document typeArticle
Rights accessOpen Access
Abstract
Power devices intended for high-voltage systems must be tested according to international standards, which includes the short-time withstand current test and peak withstand current test. However, these tests require very special facilities which consume huge amounts of electrical power. Therefore, mathematical tools to simulate such tests are highly appealing since they allow reproducing the electromagnetic and thermal behavior of the test object in a fast and economical manner. In this paper, a three-dimensional finite element method (3D-FEM) approach to simulate the transient thermal behavior of substation connectors is presented and validated against experimental data. To this end, a multiphysics 3D-FEM method is proposed, which considers both the connector and the reference power conductors. The transient and steady-state temperature profiles of both the conductors and connector provided by the 3D-FEM method prove its suitability and accuracy as compared to experimental data provided by short-circuit tests conducted in two high-current laboratories. The proposed simulation tool, which was proven to be accurate and realistic, may be particularly useful during the design and optimization phases of substation connectors since it allows anticipating the results of mandatory laboratory tests.
CitationCapelli, F., Riba, J., Pérez, J. Three-dimensional finite-element analysis of the short-time and peak withstand current tests in substation connectors. "Energies", 30 Maig 2016, vol. 9, núm. 418, p. 1-16.
URIhttp://hdl.handle.net/2117/87925
DOI10.3390/en9060418
ISSN1996-1073
Publisher versionhttp://www.mdpi.com/1996-1073/9/6/418
Collections
Share: