Coordinated lidar observations of Saharan dust over Europe in the frame of EARLINET-ASOS project during CALIPSO overpasses: A case study analysis with modeling support 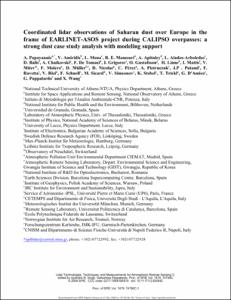 Ravetta, F.
Rizi, V.
Document typeConference report
Rights accessOpen Access
Abstract
Coordinated lidar observations of Saharan dust over Europe are performed in the frame of the EARLINETASOS (2006-2011) project, which comprises 25 stations: 16 Raman lidar stations, including 8 multiwavelength (3+2 station) Raman lidar stations, are used to retrieve the aerosol microphysical properties. Since the launch of CALIOP, the two-wavelength lidar on board the CALIPSO satellite (June 2006) our lidar network has been performing correlative aerosol measurements during CALIPSO overpasses over the individual stations. In our presentation, we report on the correlative measurements obtained during Saharan dust intrusions in the period from June 2006 to June 2008. We found that the number of dust events is generally greatest in late spring, summer and early autumn periods, mainly in southern and south-eastern Europe. A measurement example is presented that was analyzed to show the potential of a ground based lidar network to follow a dust event over a specific study area, in correlation with the CALIOP measurements. The dust transport over the studied area was simulated by the DREAM forecast model. Cross-section analyses of CALIOP over the study area were used to assess the model performance for describing and forecasting the vertical and horizontal distribution of the dust field over the Mediterranean. Our preliminary results can be used to reveal the importance of the synergy between the CALIOP measurement and the dust model, assisted by ground-based lidars, for clarifying the overall transport of dust over the European continent.
CitationPapayannis, A. [et al.]. Coordinated lidar observations of Saharan dust over Europe in the frame of EARLINET-ASOS project during CALIPSO overpasses: A case study analysis with modeling support. A: SPIE International Symposium on Remote Sensing. "SPIE Europe Remote Sensing". 2009.
URIhttp://hdl.handle.net/2117/8786
DOI10.1117/12.830842
ISBN0277-786X/09/$18
Collections
Share: