The influence of service quality on satisfaction: does gender really matter? 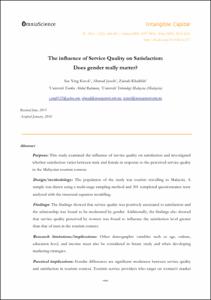 Show full item record
Kwok, See Ying
Jusoh, Ahmad
Khalifah, Zainab
Document typeArticle
PublisherOmniaScience
Rights accessOpen Access
Abstract
Purpose: This study examining the influence of service quality on satisfaction and to investigate whether satisfaction varies between male and female in response to the perceived service quality in the Malaysian tourism context. Design/methodology/approach: The population of the study is tourists travelling to Malaysia. A sample was drawn using a multi-stage sampling method and 301 completed questionnaires were analysed with structural equation modelling. Findings: The findings show that service quality is positively associated to satisfaction and the relationship is found to be moderated by gender. Additionally, the findings also show that the service quality perceived by women is found to influence the satisfaction level greater than that of men’s in the tourism context. Research limitations/implications: Other demographic variables, such age, culture, education level, and income must also be considered in future study and when developing marketing strategies. Practical implications: The gender differences is significant moderator between service quality and satisfaction in tourism context. Tourism service providers who target on women’s market are recommended to allocate more resources and attention on the important aspects namely, reliability, considerability and empathy and tangiblility aspects in order to increase the satisfaction level among female tourists. Originality/value: The findings validates the findings of previous studies by examining the moderator role of gender in the relationship between service quality and satisfaction in Malaysian context.
CitationKwok, See Ying; Jusoh, Ahmad; Khalifah, Zainab. The influence of service quality on satisfaction: does gender really matter?. "Intangible Capital", Juny 2016, vol. 12, núm. 2, p. 444-461.
URIhttp://hdl.handle.net/2117/87831
DOI10.3926/ic.673
DLB-33375-2004
ISSN1697-9818
Collections
Share: