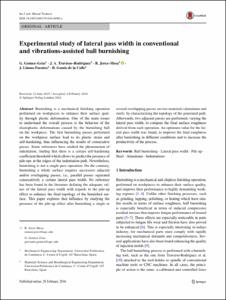 Gomis de la Calle, Bernat
Document typeArticle
Rights accessOpen Access
Abstract
Burnishing is a mechanical finishing operation performed on workpieces to enhance their surface quality through plastic deformation. One of the main issues to understand the overall process is the behavior of the elastoplastic deformations caused by the burnishing ball on the workpiece. The first burnishing passes performed on the workpiece surface lead to its plastic strain and self-hardening, thus influencing the results of consecutive passes. Some references have studied the phenomenon of indentation, finding that there is a certain self-hardening coefficient threshold which allows to predict the presence of pile-ups at the edges of the indentation path. Nevertheless, burnishing is not a single-pass operation. On the contrary, burnishing a whole surface requires successive adjacent and/or overlapping passes, i.e., parallel passes separated consecutively a certain lateral pass width. No reference has been found in the literature defining the adequate values of the lateral pass width with regards to the pile-up effect to enhance the final topology of the burnished surface. This paper explores that influence by studying the presence of the pile-up effect after burnishing a single or several overlapping passes on two materials (aluminum and steel), by characterizing the topology of the generated path. Afterwards, two adjacent passes are performed, varying the lateral pass width, to compare the final surface roughness derived from each operation. An optimum value for the lateral pass width was found, to improve the final roughness after burnishing in different conditions and to increase the productivity of the process.
CitationGomez, G., Travieso-Rodríguez, J.A., Jerez, R., Lluma, J., Gomis, B. Experimental study of lateral pass width in conventional and vibrations-assisted ball burnishing. "International journal of advanced manufacturing technology", 20 Febrer 2016, p. 1-9.
URIhttp://hdl.handle.net/2117/87826
DOI10.1007/s00170-016-8490-y
ISSN0268-3768
Collections
Share: