The impact of the EHEA in the professional internships: Interviews with the academic coordinators 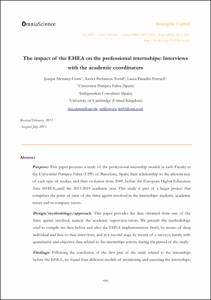 Except where otherwise noted, content on this work is licensed under a Creative Commons license : Attribution 3.0 Spain
Abstract
Purpose: This paper presents a study of the professional internship models in each Faculty at the Universitat Pompeu Fabra (UPF) of Barcelona, Spain; their relationship to the idiosyncrasy of each type of studies, and their evolution from 2009, before the European Higher Education Area (EHEA), until the 2013-2014 academic year. This study is part of a larger project that comprises the point of view of the three agents involved in the internships: students, academic tutors and in-company tutors. Design/methodology/approach: This paper provides the data obtained from one of the three agents involved, namely the academic supervisor-tutors. We present the methodology used to compile the data before and after EHEA implementation: firstly, by means of deep individual and face-to-face interviews, and in a second stage by means of e-surveys, jointly with quantitative and objective data related to the internships activity during the period of the study. Findings: Following the conclusion of the first part of the study related to the internships before the EHEA, we found four different models of monitoring and assessing the internships; we anticipated the four models would converge into two, and eventually into one. The final model expected was focused on more intensive monitoring. In the second part of the study, even though we found fewer changes in the models than we expected, the impact of the EHEA deployment has been very important in quantitative aspects and in the breadth of the changes. Also, for some Faculties, the internship has become one of the most important subjects of the curricula. Originality/value: This is the first study of the EHEA impact on the professional internships in a Spanish University.
CitationAlemany, Josepa; Perramon, Xavier; Panadès-Estruch, Laura. The impact of the EHEA in the professional internships: Interviews with the academic coordinators. "Intangible Capital", Juny 2016, vol. 12, núm. 2, p. 420-443.
URIhttp://hdl.handle.net/2117/87822
DOI10.3926/ic.611
DLB-33375-2004
ISSN1697-9818
Collections
Share: