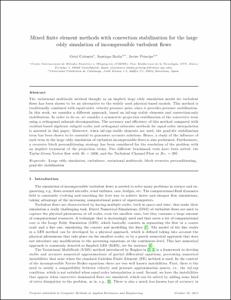 Except where otherwise noted, content on this work is licensed under a Creative Commons license : Attribution-NonCommercial-NoDerivs 3.0 Spain
Abstract
The variational multiscale method thought as an implicit large eddy simulation model for turbulent flows has been shown to be an alternative to the widely used physical-based models. This method is traditionally combined with equal-order velocity–pressure pairs, since it provides pressure stabilization. In this work, we consider a different approach, based on inf–sup stable elements and convection-only stabilization. In order to do so, we consider a symmetric projection stabilization of the convective term using an orthogonal subscale decomposition. The accuracy and efficiency of this method compared with residual-based algebraic subgrid scales and orthogonal subscales methods for equal-order interpolation is assessed in this paper. Moreover, when inf–sup stable elements are used, the grad–div stabilization term has been shown to be essential to guarantee accurate solutions. Hence, a study of the influence of such term in the large eddy simulation of turbulent incompressible flows is also performed. Furthermore, a recursive block preconditioning strategy has been considered for the resolution of the problem with an implicit treatment of the projection terms. Two different benchmark tests have been solved: the Taylor–Green Vortex flow with Re=1600Re=1600, and the Turbulent Channel Flow at Ret=395Ret=395 and Ret=590Ret=590.
CitationColomés, O., Badia, S., Principe, J. Mixed finite element methods with convection stabilization for the large eddy simulation of incompressible turbulent flows. "Computer methods in applied mechanics and engineering", Juny 2016, vol. 304, p. 294-318.
URIhttp://hdl.handle.net/2117/87783
DOI10.1016/j.cma.2016.02.026
ISSN0045-7825
Publisher versionhttp://www.sciencedirect.com/science/article/pii/S0045782516300561
Collections
Share: