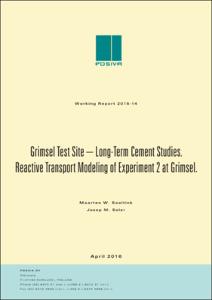 Soler Matamala, Josep M.
Document typeResearch report
Rights accessOpen Access
All rights reserved. This work is protected by the corresponding intellectual and industrial property rights. Without prejudice to any existing legal exemptions, reproduction, distribution, public communication or transformation of this work are prohibited without permission of the copyright holder
Abstract
Within the framework of the GTS-LCS project (Grimsel Test Site – Long-Term Cement Studies), an in-situ experiment lasting about 5 years was started in 2009 to study water-cement-rock interactions in fractured granite. A solid cement source (OPC) was installed in a borehole intersecting a water conducting fracture. Two other boreholes at about 0.56 m (observation) and 1.12 m (extraction) from the emplacement borehole were used to monitor the evolution of water composition in the fracture. Prior to the experiment, a tracer test was performed to characterize the initial flow and transport properties of the rock around the experimental boreholes. The flow and reactive transport calculations have been performed using the Retraso-CodeBright code. Solute transport is assumed to be controlled by diffusion in the cement and by advection-dispersion in the rock fracture. Initially, the flow model calculated from the results of the pre-emplacement tracer test, assuming a homogeneous fracture, was used to model reactive transport after emplacement of the cement. Since the small grid size from the flow model led to excessive computational times, the domain was divided into (a) a 1D radial model for the emplacement borehole and a small volume of rock around it, and (b) a 2D model for the rest of the domain. The results from (a) were used as input for (b). The model results show dissolution of portlandite and C-S-H in a thin (mm) external layer of the cement (emplacement borehole). In the rock fracture there is dissolution of the primary silicates (except phlogopite) and precipitation of C-S-H, C-A-S-H and calcite. Fracture porosity is reduced in a belt around the 3 boreholes, converging at the extraction borehole (due to the magnitude of the extraction flow rate). The decrease in porosity, due mainly to the precipitation of calcite, is stronger right next to the extraction borehole, due to the more favorable mixing conditions between Grimsel groundwater and cement porewater. The changing water injection rate conditions in the emplacement borehole lead to changes in the flow field and in the position of the mineral reaction fronts.
CitationSaaltink, M., Soler, J. "Grimsel test site - Long-term cement studies.Reactive transport modeling of experiment 2 at Grimsel". 2016.
Is part ofWorking report 2016-14
URIhttp://hdl.handle.net/2117/87772
URL other repositoryhttp://www.posiva.fi/en/databank/grimsel_test_site_long-term_cement_studies._reactive_transport_modeling_of_experiment_2_at_grimsel..1867.xhtml
Collections
Share: