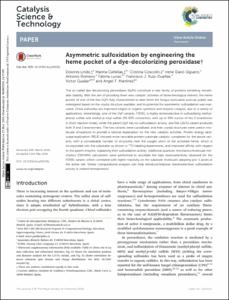 The so-called dye-decolorizing peroxidases (DyPs) constitute a new family of proteins exhibiting remarkable stability. With the aim of providing them new catalytic activities of biotechnological interest, the heme pocket of one of the few DyPs fully characterized to date (from the fungus Auricularia auricula-judae) was redesigned based on the crystal structure available, and its potential for asymmetric sulfoxidation was evaluated. Chiral sulfoxides are important targets in organic synthesis and enzyme catalysis, due to a variety of applications. Interestingly, one of the DyP variants, F359G, is highly stereoselective in sulfoxidizing methylphenyl sulfide and methyl-p-tolyl sulfide (95–99% conversion, with up to 99% excess of the S enantiomer in short reaction times), while the parent DyP has no sulfoxidation activity, and the L357G variant produces both R and S enantiomers. The two variants were crystallized, and their crystal structures were used in molecular simulations to provide a rational explanation for the new catalytic activities. Protein energy landscape exploration (PELE) showed more favorable protein–substrate catalytic complexes for the above variants, with a considerable number of structures near the oxygen atom of the activated heme, which is incorporated into the substrates as shown in 18O-labeling experiments, and improved affinity with respect to the parent enzyme, explaining their sulfoxidation activity. Additional quantum mechanics/molecular mechanics (QM/MM) calculations were performed to elucidate the high stereoselectivity observed for the F359G variant, which correlated with higher reactivity on the substrate molecules adopting pro-S poses at the active site. Similar computational analyses can help introduce/improve (stereoselective) sulfoxidation activity in related hemeproteins.
CitationLinde, Dolores [et al.]. Asymmetric sulfoxidation by engineering the heme pocket of a dye-decolorizing peroxidase. "Catalysis Science & Technology", 23 Maig 2016.
URIhttp://hdl.handle.net/2117/87761
DOI10.1039/c6cy00539j
ISSN2044-4753
Publisher versionhttp://pubs.rsc.org/en/content/articlelanding/2016/cy/c6cy00539j#!divAbstract