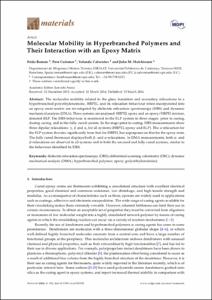 Document typeArticle
Rights accessOpen Access
Abstract
The molecular mobility related to the glass transition and secondary relaxations in a hyperbranched polyethyleneimine, HBPEI, and its relaxation behaviour when incorporated into an epoxy resin matrix are investigated by dielectric relaxation spectroscopy (DRS) and dynamic mechanical analysis (DMA). Three systems are analysed: HBPEI, epoxy and an epoxy/HBPEI mixture, denoted ELP. The DRS behaviour is monitored in the ELP system in three stages: prior to curing, during curing, and in the fully cured system. In the stage prior to curing, DRS measurements show three dipolar relaxations: , and , for all systems (HBPEI, epoxy and ELP). The -relaxation for the ELP system deviates significantly from that for HBPEI, but superposes on that for the epoxy resin. The fully cured thermoset displays both - and -relaxations. In DMA measurements, both - and -relaxations are observed in all systems and in both the uncured and fully cured systems, similar to the behaviour identified by DRS.
CitationRoman, F., Colomer, P., Calventus, Y., Hutchinson, J.M. Molecular mobility in hyperbranched polymers and their interaction with an epoxy matrix. "Materials", 01 Març 2016, vol. 9, núm. 3.
URIhttp://hdl.handle.net/2117/87626
DOI10.3390/ma9030192
ISSN1996-1944
Collections
Share: