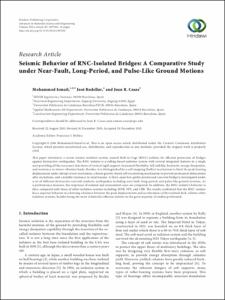 Document typeArticle
Rights accessOpen Access
Abstract
This paper introduces a recent seismic isolation system, named Roll-in-Cage (RNC) isolator, for efficient protection of bridges against destructive earthquakes. The RNC isolator is a rolling-based isolation system with several integrated features in a single unit providing all the necessary functions of vertical rigid support, horizontal flexibility, full stability, hysteretic energy dissipation, and resistance to minor vibration loads. Besides, it is distinguished by a self-stopping (buffer) mechanism to limit the peak bearing displacement under abrupt severe excitations, a linear gravity-based self-recentering mechanism to prevent permanent dislocations after excitations, and a notable resistance to axial tension. A three-span box-girder prestressed concrete bridge is investigated under a set of different destructive real and synthetic earthquakes including near-fault, long-period, and pulse-like ground motions. As a performance measure, the responses of isolated and nonisolated cases are compared. In addition, the RNC isolator's behavior is then compared with those of other isolation systems including HDB, FPS, and LRB. The results confirmed that the RNC isolator has a superior behavior in achieving a balance between the peak displacements and accelerations of the isolated deck, relative other isolation systems, besides being the most (relatively) efficient isolator in the great majority of studies performed.
CitationIsmail, M., Rodellar, J., Casas, J. Seismic behavior of RNC-isolated bridges: a comparative study under near-fault, long-period, and pulse-like ground motions. "Advances in materials science and engineering", Gener 2016, vol. 2016, núm. Article ID 1897045, p. 1-18.
URIhttp://hdl.handle.net/2117/87564
DOI10.1155/2016/1897045
ISSN1687-8434
Publisher versionhttp://www.hindawi.com/journals/amse/2016/1897045/
Collections
Share: