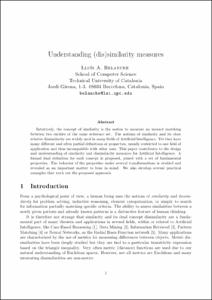 Document typeExternal research report
Rights accessOpen Access
Abstract
Intuitively, the concept of similarity is the notion to measure an inexact matching between two entities of the same reference set. The notions of similarity and its close relative dissimilarity are widely used in many fields of Artificial Intelligence. Yet they have many different and often partial definitions or properties, usually restricted to one field of application and thus incompatible with other uses. This paper contributes to the design and understanding of similarity and dissimilarity measures for Artificial Intelligence. A formal dual definition for each concept is proposed, joined with a set of fundamental properties. The behavior of the properties under several transformations is studied and revealed as an important matter to bear in mind. We also develop several practical examples that work out the proposed approach.
CitationBelanche, Ll. "Understanding (dis)similarity measures". 2013.
Is part ofLSI-12-16-R
URIhttp://hdl.handle.net/2117/87543
Collections
Share: