Assessment of the mechanisms involved in the removal of emerging contaminants by microalgae from wastewater: a laboratory scale study 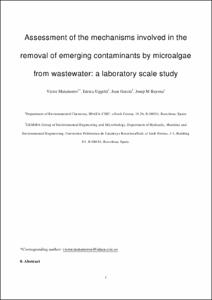 Aerated batch reactors (2.5 L) fed either with urban or synthetic wastewater were inoculated with microalgae (dominated by Chlorella sp. and Scenedesmus sp.) to remove caffeine, ibuprofen, galaxolide, tributyl phosphate, 4-octylphenol, tris(2-chloroethyl) phosphate and carbamazepine for 10 incubation days. Non-aerated and darkness reactors were used as controls. Microalgae grew at a rate of 0.25 d-1 with the complete removal of N-NH4 during the course of the experiment. After 10 incubation days, up to 99% of the microcontaminants with a Henry’s law constant higher than 3 10-1 Pa m3 mol-1 (i.e., 4-octylphenol, galaxolide, and tributyl phosphate) were removed by volatilization due to the effect of air stripping. Whereas biodegradation was effective for removing ibuprofen and caffeine, carbamazepine and tris(2-chloroethyl) phosphate behaved as recalcitrant compounds. The use of microalgae was proved to be relevant for increasing the biodegradation removal efficiency of ibuprofen by 40% and reducing the lag phase of caffeine by 3 days. Moreover, the enantioselective biodegradation of S-ibuprofen suggested a biotic prevalent removal process, which was supported by the identification of carboxy-ibuprofen and hydroxy-ibuprofen. The results from microalgae reactors fed with synthetic wastewater showed no clear evidences of microalgae uptake of any of the studied microcontaminants.
CitaciónMatamoros, V., Uggetti, E., Garcia, J., Bayona, J.M. Assessment of the mechanisms involved in the removal of emerging contaminants by microalgae from wastewater: a laboratory scale study. "Journal of hazardous materials", Gener 2016, vol. 301, p. 197-205.
URIhttp://hdl.handle.net/2117/87474
DOI10.1016/j.jhazmat.2015.08.050
ISSN0304-3894
Versión del editorhttp://www.sciencedirect.com/science/article/pii/S030438941530042X