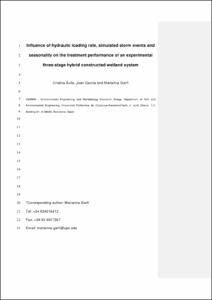 Document typeArticle
Rights accessOpen Access
Abstract
An experimental hybrid system based on an anaerobic reactor followed by three stages of different constructed wetland configurations was evaluated when operating under a high hydraulic loading rate (HLR = 0.27 m d-1, considering the area of the VF beds) for one year, which corresponds to four times the nominal hydraulic loading rate, with the purpose of reducing the specific area required. Moreover, in order to assess its buffer capacity, a major storm event was simulated by increasing the HLR 10 times during 1 h. A tracer experiment was also performed to determine the experimental hydraulic retention time (HRT). The system consisted of a hydrolytic upflow sludge blanket (HUSB) reactor followed by two alternating 1.5 m2 vertical subsurface flow, a 2 m2 horizontal subsurface flow and a 2 m2 free water surface constructed wetlands operating in series. The system achieved very high values of removal of solids, organic matter and nutrients (82, 93, 96 and 75% for COD, BOD5, TSS and NH4-N, respectively). Removal of PO4-P and SO42- were though fairly low, of 11 and 10%, respectively. There was a seasonal effect in the system for parameters whose removal highly depends on biodegradation, being enhanced under warmer conditions (98 and 92% removal of BOD5 and NH4-N in summer vs. 87 and 67% removal of BOD5 and NH4-N in winter). The experimental HRT of the entire system was of about 38 h, which is greater than the theoretical HRT (28 h). During the simulation of the storm event removal efficiencies did not vary significantly from the ones obtained under normal conditions (average of 83, 99 and 80% for COD, TSS and NH4-N removal, respectively). The system showed a very good buffer capacity coping with sharp fluctuations in flow to be treated, showing to be an adequate solution for wastewater treatment in small communities. The specific area requirement under the long-term operation showed to be as low as 2 m2/PE.
CitationAvila, C., Garcia, J., Marianna Garfi'. Influence of hydraulic loading rate, simulated storm events and seasonality on the treatment performance of an experimental three-stage hybrid constructed wetland system. "Ecological engineering", Febrer 2016, vol. 87, p. 324-332.
URIhttp://hdl.handle.net/2117/87466
DOI10.1016/j.ecoleng.2015.11.042
ISSN0925-8574
Publisher versionhttp://www.sciencedirect.com/science/article/pii/S0925857415302986
Collections
Share: