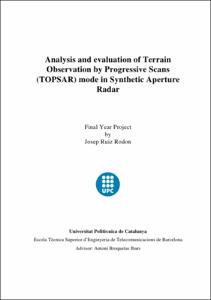 Analysis and evaluation of TOPSAR in SAR.pdf (5,682Mb)
Share:

Document typeMaster thesis (pre-Bologna period)
Rights accessOpen Access
Abstract
Synthetic Aperture Radar (SAR) is a technique used in radar (RAdio Detection And Ranging) [1] systems to get high resolution images which are impossible to obtain with a conventional radar. This method allows us to acquire images from the surface of the Earth or other planets from large distances. In SAR [2], a single antenna is used to get information of the targets, and the platform movement, where the antenna is fixed, is used to spread the Doppler history of received echoes improving the resolution of processed images. Remote sensing is a wide area which studies different techniques to acquire information about targets situated at far distances. These techniques can be classified in two different areas according to their basic operation. The first group, called passive remote sensing [3] [4], uses passive sensors to acquire the energy radiated by the targets. This energy can come from an external source, such as Sun radiation, being reflected by the object or it can be emitted by the target itself. On the other hand, active remote sensing systems [4] emit pulses to illuminate the scanned area, providing their own energy. So, although it requires a more complex system, active sensing does not require an external source to operate which is an advantage when the conditions are not favourable. SAR and other radar techniques are examples of active sensors, working at frequencies between 0.3 GHz and 300GHz. These systems send pulses towards the scanned area, the interaction of each pulse with the surface originates an echo which arrives to the receiver. This echo is originated by the energy backscattered by the objects in the scene and it will be dependant of the backscattering profile of the targets (radar cross-section) [5] [6]. The time delay and strength of power received as well as frequency properties of the returns are processed to determine the target locations and characteristics. Synthetic aperture is similar to a conventional real aperture radar (RAR) antenna but it is achieved by signal processing. In a SAR, the antenna, installed in a moving platform, sends pulses to the scene and receives backscattered returns. The movement of the platform makes possible to illuminate the targets at different positions of the satellite trajectory, which is equivalent to have multiple antennas illuminating the scene at the same time. Thus, SAR is a fairly recent acquisition method that has some advantages in comparison with other remote sensing techniques. The most significant are: · Day/Night and all weather condition imaging since it does not depend on external power sources to detect the targets. · Geometric resolution independent of altitude or wavelength. · Signal data characteristic unique to the microwave region of EM spectrum which has suffers less deterioration in atmosphere propagation. The SAR systems started with aero-transported missions and later, first space missions were sent. The SAR beginning dates back to 1951 when C. Wiley postulated the Doppler
SubjectsSynthetic Aperture Radar, Radar d'obertura sintètica
URIhttp://hdl.handle.net/2117/87367
Collections
Share: