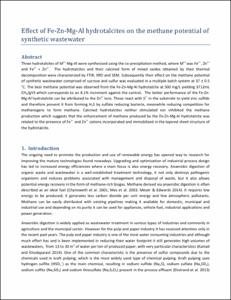 Dahl Olli, Peka
Document typeArticle
Rights accessOpen Access
Abstract
Three hydrotalcites of M2+-Mg-Al were synthesized using the co-precipitation method, where M2+ was Fe2+, Zn2+ and Fe2+ + Zn2+. The hydrotalcites and their calcined form of mixed oxides obtained by their thermal decomposition were characterized by FTIR, XRD and SEM. Subsequently their effect on the methane potential of synthetic wastewater comprised of sucrose and sulfur was evaluated in a multiple batch system at 37 ± 0.5 °C. The best methane potential was observed from the Fe-Zn-Mg-Al hydrotalcite at 500 mg/L yielding 372 mL CH4/gVS which corresponds to an 8.1% increment against the control. The better performance of the Fe-Zn-Mg-Al hydrotalcite can be attributed to the Zn2+ ions. These react with S2- in the substrate to yield zinc sulfide and therefore prevent it from forming H2S by sulfate reducing bacteria, meanwhile reducing competition for methanogens to form methane. Calcined hydrotalcites neither stimulated nor inhibited the methane production which suggests that the enhancement of methane produced by the Fe-Zn-Mg-Al hydrotalcite was related to the presence of Fe2+ and Zn2+ cations incorporated and immobilized in the layered sheet structure of the hydrotalcite.
CitationRodriguez, L., Llorca, J., Dahl, P. Effect of Fe-Zn-Mg-Al hydrotalcites on the methane potential of synthetic sulfate-containing wastewater. "Journal of water process engineering", 01 Abril 2016, vol. 10, p. 120-127.
URIhttp://hdl.handle.net/2117/87353
DOI10.1016/j.jwpe.2016.03.001
ISSN2214-7144
Collections
Share: