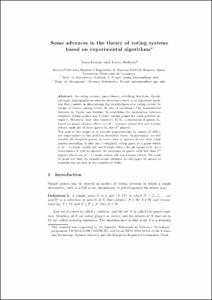 Document typeExternal research report
Rights accessOpen Access
Abstract
In voting systems, game theory, switching functions, threshold logic, hypergraphs or coherent structures there is an important problem that consists in determining the weightedness of a voting system by means of trades among voters in sets of coalitions. The fundamental theorem by Taylor and Zwicker cite{TaZw92} establishes the equivalence between weighted voting games and $k$-trade robust games for each positive integer $k$. Moreover, they also construct, in cite{TaZw95}, a succession of games $G_k$ based on magic squares which are $(k-1)$-trade robust but not $k$-trade robust, each one of these games $G_k$ has $k^2$ players. The goal of this paper is to provide improvements by means of different experiments to the problem described above. In particular, we will classify all complete games (a basic class of games) of less than eight players according to they are: a weighted voting game or a game which is $(k-1)$-trade robust but not $k$-trade robust for all values of $k$. As a consequence it will we showed the existence of games with less than $k^2$ players which are $(k-1)$-trade robust but not $k$-trade robust. We want to point out that the classifications obtained in this paper by means of experiments are new in the mentioned fields.
CitationFreixas, J., Molinero, X. "Some advances in the theory of voting systems based on experimental algorithms". 2006.
Is part ofLSI-06-5-R
URIhttp://hdl.handle.net/2117/87345
Collections
Share: