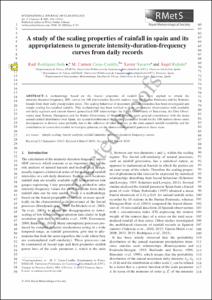 A methodology based on the fractal properties of rainfall has been applied to obtain the intensity-duration-frequency, IDF, curves for 100 pluviometric Spanish stations over the Iberian Peninsula and the Balearic Islands from their daily precipitation series. The scaling behaviour of maximum rainfall intensities has been investigated and simple scaling has resulted suitable. This methodology has been verified in three emblematic observatories with available sub-daily registers and current known generalized IDF relationships: the Fabra Observatory of Barcelona, the Ebre Observatory near Tortosa (Tarragona) and the Retiro Observatory of Madrid. Despite some general concordance with the mean annual rainfall distribution over Spain, the spatial distribution of the scaling parameter found for the 100 stations shows some discrepancies in diverse areas probably due to the influence of other features, as the inter-annual rainfall variability and the contribution of convective rainfall to total precipitation, on the characteristic rainfall pattern in these areas.